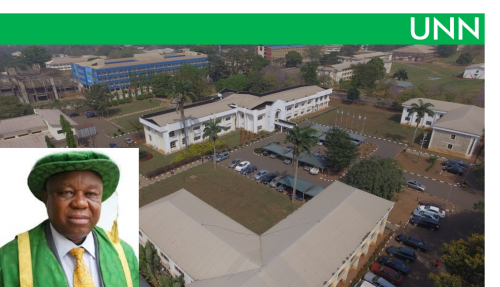 Professor Charles Arizechukwu Igwe was appointed the Vice-Chancellor of the University of Nigeria, Nsukka in 23rd May, 2019. Prior to that, he was a Professor/Consultant in the Department of Soil Sciences in the Faculty of Agricultural Sciences; a position he held for over Fourteen (14) years. He was appointed Deputy Vice-Chancellor (Administration) on 28th April 2016 and was reappointed in 2018.

Charles Arizechukwu Igwe, a Professor of Soil Science was born at Awka, Anambra State, Nigeria on August 23, 1958. He holds a PhD, M.Sc. and B Agric degrees in Soil Science from University of Nigeria, Nsukka. He also obtained Postgraduate Diploma in Soil Science from Agricultural University, Norway, Ås. He was Head of Department; Associate Dean of Faculty; Dean of Faculty and Directors of Centres at various times. Charles was Visiting Researcher/Professor in Universities located in Germany, Japan, Norway, Italy and France. He is a member, University Governing Council and has supervised Undergraduates, Masters and many PhD students in his discipline. He is an External Examiner and Professorial Assessor in many Nigerian and European Universities.
Professor Igwe’s research focuses on the contributions of organic and mineral colloids in stability of tropical soils. He contributed significantly in the knowledge of stability of unstable tropical soils which undergo catastrophic soil erosion with intensive tropical rainfall. In the face of Global Climate Change, he expanded the scope of his research to include the “Carbon sequestration in tropical soils”. In his search to unravel inherent soil factors influencing erodibility (K) factor of erosion models, he published some pioneering works on soil colloidal-dispersion. He is author/co-author of many peer-reviewed articles in reputable Journals of Soil/Environmental Sciences.
He is a NORAD Fellow; Fellow of Alexander von Humboldt (AvH) Germany; Regular Associate, International Centre for Theoretical Physics, Trieste, Italy; Fellow, Japanese Society for Promotion of Science; Winner, University of Nigeria Vice-Chancellor’s Faculty and University Prizes 1992/93; Listed in Marquis Who’s Who in Science and Engineering; participant in German DAAD/DIES Deans Course 2009.
Charles attracted scientific equipment donations to the University from AvH in 2001 and 2010 He is a two times recipient of Research Grant from Third World Academy of Sciences (TWAS). Professor Igwe is married with 4 children.

Organization For The Prohibition of Chemical Weapons